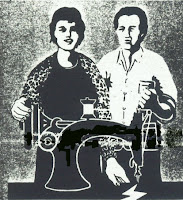 ‘WE MUST STAND TOGETHER’

"EDITOR’S NOTE: The Chinatown Workers’ Festival held on Saturday night, August 24, marked a historic occasion for the San Francisco Chinese community. For the first time in decades, workers front Chinatown gathered to celebrate their achievements and share their experiences. An enthusiastic crowd of over 600 from Chinatown as well as from all over the Bay Area packed the Chinese Cultural Center to participate in this event, organized by Lee Mah and Jung Sai workers and their supporters…

“This is gonna be a dynamite show, I can tell already,” said a young garment worker on our way into the Chinese Cul­tural Center where the Festival. was about to start. And there was something in the air that night, as outside the sun was melting into a deceptively still San Francisco sea, inside the auditorium was supercharged with a militant spirit born out of a growing struggle and unity.

Just as the Jung Sai and Lee Mah workers have refused to let anything or anybody divide or demoralize them, those working on the Festival were determined that the program would not only be entertaining, educational and uplifting, but a call to united action by working people and the community.

A bit long and a bit uneven at times, sure.. .but the message throughout the program came on loud, clear and strong:

oppressive and exploitative conditions of electronic and garment workers in Chinatown, as well as their tight back. Those playing the bosses and their supervisors hilariously captured the management “running dog” mentality. But it was the workers playing themselves and the supporters playing themselves who were key in why the skits went over so well with the largely working class audience.

“Half the Sky”, a popular skit by the Chinese Modern Theater (CMT) on Chinese women’s oppression and liberation, again provoked responses like: “That’s my husband up there! He’s just like that!” and “That’s exactly how it is!” But the CMT’s “Why We Should Support the Workers” really hit the audience with the greatest emotional impact. Briefly the skit revolves around a lively discussion on a Chinatown street among three women—one of whom’s thinking of going to work at Plain Jane to support her family as her mother has been laid off at another garment factory; another woman who tries to persuade the other not to work there; and the third, a Jung .Sai striker. Upon discovering that one of the women may become a scab, the Jung Sal striker begins relating the unbearable conditions leading up to the strike; how too long and for too little Chinatown workers have been robbed of their rights and human dignity and a decent living; that we must begin now to stop the brutal exploitation and oppression of Chinatown workers, -that we must build and spread this fight for justice for Chinese and All workers.

I saw some of the Jung Sai strikers clutching their chests with clenched fists, testifying to the truth of what the actresses were saying. As the skit reached peak levels where the Jung Sal workers’ anger boiled over--determined to never be oppressed again--many in the audience, particularly some of the workers, burst into bitter tears. At the skit’s conclusion, the audience whole-heartedly applauded the fine presentation. The CMT powerfully drew upon the daily experiences of Chinatown workers to evolve the essence and raw gut level emotions generating the Jung Sai and Lee Mah workers’ militant stand.

Three songs were especially written for the Festival and are reprinted in the supplementary sheet enclosed. “Song of the Chinese in America” was written and performed by the Friendship Chorus in Cantonese, and was a very beautiful and moving lyrical tribute. “We Must Stand Together” by the May 4th Singers (M4S) an Asian American cultural group, was a snappy, spirited song sharpening the political advances of the struggle…

‘Song of the Chinese in America’

Cross the ocean over waves,

away from home we came

fearing neither hardship nor bitterness,

we dug the mines,

and built the railroads,

In countless fishing boats and nets

-through wind and rain we toiled.

with our bare hands developed it into orchards and farms——

This is our home.

In garment shops, laundries, and restaurants, we worked hard.

Our lives have been discrimination, oppression, and exploitation;

and immigration laws that keep workers silent and families apart.

The wheel of history cannot be stopped,

new generations blossom to the challenge

-Now we push forward in unity.

A hundred years of struggle,

has nurtured a new force..

Our minds are broad and open,

Our sights far and wide,

we are marching towards peace.

United with people of all races.

to create a new world

So strong is our determination.

So high our spirit.

Victory is in sight!

‘We Must Stand Together !’

Who dares to make waves that will change

Who dares to go against the tide?

Fighting for the right to organize

We’ve been worked too hard for far too long

Win back our jobs, get the bosses off

CHORUS: We must stand together—

It’s a fight for the better--

We can’t be divided

As the class whose profits just won’t

They can’t keep immigrants down no more

We ain’t scared of their cops or their

Y ‘know, it ain‘t much diff’rent from

We gotta put a stop to those runaway shops~.

Link up with workers’ struggles ‘round

Rise up! 0ur time has come!

We’re gonna build this struggle all. over the land

Come on out to the picket lines!

We’ve gotta. take on this system that keeps us down

Place the power in our working hands!

But the struggle is long overdue.