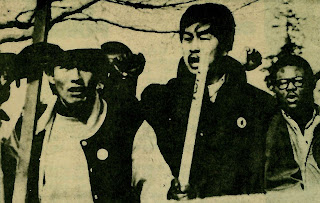 (Submitted by the Asian American Political )

The Asian experience in is unique. The lives of the Japanese, Chinese, Filipino, Korean, and other Asian people have similarities and differences, but generally fall under the category of the Yellow Experience. The phenomena of a colorful people living in a white society deserves study, understanding, and sensitive analysis. It deserves this study because these colorful people need it, in order to understand themselves and the society in which they live.

The effects of American and Western civilization on the non-Western world have been profound. From the earliest contacts of European explorers with the Chinese and

Southeast Asians to the present-day Western military, economic, and political activities and spheres in , the 'white' man has been involved with the ‘yellow’ man.

From the study of these two related experiences- Asians in America and Westerners in Asia—we can perhaps arrive at some understanding about the ‘yellow-white' relationship at its social and psychological roots and manifestations:

A) Social Psychology: Dynamics of Racism

The natural alliance of peoples of color results from the exploitation according to and exclusively because of sheer visibility. In this sense, it is simplest put that we know when we are being lied to. Such a perspective as we are attempting to develop could not necessarily emerge from a view of American culture only. We take heart and example from the continued existence of our culture abroad, which proves to us the viability of our heritages the world over.

To explore the social psychological dynamics of being yellow in a white society.

B) The Asian and His Community

Identification with community; alienation from the same.

A study of the inter-community tensions and harmony: distances, effects of national origins, the rural-urban and middle class ghetto relations, and the historical effects

Our Piece of the Pie: Its value… acculturation, accommodation, and affluence.

A major problem of the ghetto is the failure of its youth who are fortunate enough to learn a skill, to return the benefits of that skill to the community. This problem is neglected by the existing educational system, which prepares the individual for the assumption of an economically productive position within society. The skilled individual who can and does return to aid the community is the exception, not the rule. The Third World individual who does return is an even greater rarity because the University which already produces too few of these individuals has few people initially and lacks the relevant courses catering to the specific needs of the community.

The problem of language: dual life and language as presented by immigrant life and handicaps presents the need for Cantonese as well as the desirability of other Asian languages as spoken in the .

The roots of the Asian-American lies in . A knowledge of history is essential;
most pertinent is history involving Western man. Our course offerings in this part of the department would thus center around the nature of the Asian person, and his relationship with Western man. We include the study of ‘Overseas Asians' in this focus, because most Overseas Asians remain in outside of their national origins. Also, Overseas Asian (except Asian-Americans) are distant from . Community work there is difficult: histoty and current literature are the best we can do.

A) The Roots of Asian Man: Social Conditions for Emigration

B. Westernization of : Imperialism, Colonization, Modernization and Effects

The study of cities—Hong Kong, Shanghai, , and —as case studies in westernization . . . a study of customs, values and social perceptions.

Asians in various contexts: Europe, Africa, Middle East, and in comparison
with Asians in .

A core course on ideology, organization of communism in the Asian countries

Eg: and the thought of Mao.

Conditions for Revolution in

Effects of the West in Revolution and Unrest in .