TWLF LEADER TELLS WHY HE’S WHERE IT’S AT

“ ‘As a child I was interned for four years in concentration camps in and .’

Richard Aoki takes another drag on his cigarette and continues to carefully and unemotionally describe his life under the gun of American racism.

Richard Aoki is a spokesman for the Third World Liberation Front at U.C.Berkeley.

After WW II, the Japanese-Americans were liberated from the ‘relocation centers’ and Richard began his education in black ghetto schools in the Bay Area.

‘Of my junior high graduating class, more than 5O% have been in jail or are in jail now. I see this as a reflection of their being unable to achieve a standard of living through traditional means.’

One high school teacher advised Richard that ‘I’d end up in San Quentin five years after I got out of school.’

‘I took it on a very personal level when they vamped on me, but in retrospect,’ he says now, ‘I see they couldn’t have acted in any other way because of the racist nature of the institution.’

When he was 17 Richard signed up for the Army hoping to attain a measure of ‘vertical mobility.’ He was offered a commission ‘but I told them I wanted to do some other things.’

After the Army Richard spent two years at a junior college in a pre-med program. But, ‘I gave that up upon being convinced of the racist nature of the medical profession. There is no institution in this country that doesn’t have it.

‘I started asking around about medical schools and found that there was quota system for Asian-American.’

Having failed to Find a racism-free :one in either the service or school Richard went on the road. He spent six years ‘wandering about the country, just seeing what it’s all about.’

Along the way he worked as a truck driver, hospital orderly, clerk and factory hand. He learned two things: that there aren’t any areas in this country really free of racism, and that his thing was to work for the Asian-American community.

‘I became convinced that this is my country, and if it’s going to become a more positive society then I have to stay here and help.’

Leaving the road, he returned to school, graduated with honors in sociology, and is now a grad student at UC. The Third World Strike is his way of creating a racism-free zone for this country’s Third Worlders.

‘I think the strike’s going on quiet well. Morale’s quite high, we still think we’re going to win.”

Richard believes the will help the minority communities by creating ‘a circular thing where the youth leaves the community, comes on campus and then goes back to the community.’

The TWLF has put a great deal of energy into building strike support in the community. ‘If we convince them that we’re fighting in their best interests, then there will be another dimension to the struggle.’

The Front expects this support to materialize Thursday (BARB press time) on campus, and the future direction of their strike depends on Thursday’s turn-out.

‘The will be instituted at U.C.’ Richard says flatly, ‘it’s just a matter of time. The strike is a manifestation of the question of who’s going to control it.’

Though the TWLF has received a favorable response from some faculty and administrators, ‘the main sources of power at the university have indicated an intransigent attitude of non-cooperation with the Third World Liberation Front.’

The Front is aware that many white strikers are dissatisfied with the strike’s tactical pace, but ‘they haven’t seen anything yet, we’ve just started.’

‘Multi-faceted systems of pressure will be exerted on the University.’

Richard allows that the TWLF at is not in the same place as the Front at State. He says that the branch of TWLF still considers itself to be ‘responsible’, and has been trying ‘to keep a lid on things.’

But he warns that the powers in the University had better move quickly to meet the demands before the lid flies off and ‘everyone does his own thing.’ “ 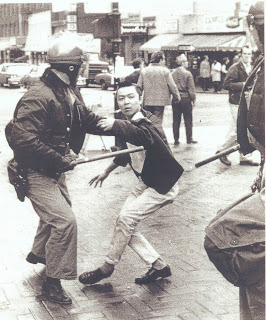 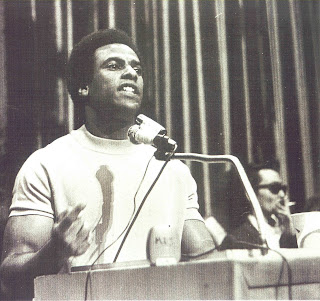